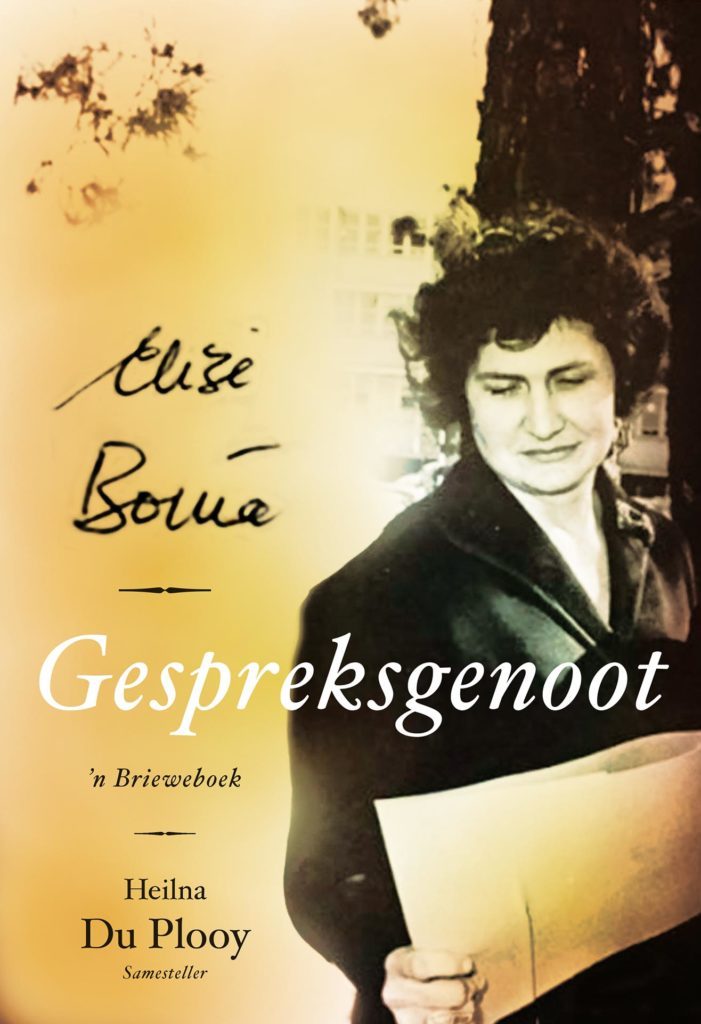 This thick volume of about 700 pages of letters written by the late Elize Botha, beloved literary critic and academic and various well-known Afrikaans writers is compiled by Heilna du Plooy. Authors and poets such as Audrey Blignault, Hennie Aucamp, NP van Wyk Louw, Elisabeth Eybers, Lina Spies and many more corresponded with Botha. Some of the letters are deeply touching, others will make you laugh or let you re-read them for the fresh insight they offer. The correspondents portray the small and big events in their lives and share their opinions about books and people. It is an intimate text that will please many readers.

I am a reader, not because I don’t have a life, but because I choose to have many.

This is an unusual and very specific book and obviously you must understand Afrikaans to even think of reading it.

Pay heed to the delightful name: Gespreksgenoot – ‘n Brieweboek (Companion – A Letters Book). What surprised me most was how the letters capture the time, a specific period, and the Afrikaans literary world which because of the politics of the country, was all-important at the time.

Because I wasn’t part of that world yet knew about the people and read some of the books while writing about the arts and interviewed Elize Botha at a specific time, it’s been an amazing read.

The compiler (and the word doesn’t really do justice to what must have been a mammoth task brilliantly executed) who was going to write a biography of Botha, a woman ahead of her time and supremely important in the Afrikaans literary world, was handed the key to much of her letter-writing which was how she kept contact and became close friends with so many writers. Starting to read through the letters, Du Plooy very quickly realised that Botha would be much better served if she could simply put the letters together in a certain fashion to tell the story.

From the beginning, she decided that once a letter had found its way into the book, it would not be censored in any way. It’s either in or out, warts and all. And she needn’t have feared, for those of us on the edges, the finer gossip items are too nuanced and for those who can pick it up, they probably knew it all already. But it’s not that kind of book anyway and Botha was not the kind of person to be entertained unduly by idle gossip. She had far more interesting things to talk about. It is these conversations between those with similar interests – literature – that are so fascinating and educational.

There are many surprises, quite unexpected, I would imagine. For example, the art of letter writing, if anything, points a finger at a lost art since we now rely on the internet and social media to communicate. What a joy to still encounter someone who wrote such meaningful letters – and regularly. It was the way she communicated with those not in her immediate vicinity and what a blessing for us, because she has riches to impart on many levels.

More than anything, it is the way the letters have been written, the language, the topics they discuss and how regularly in extremely busy lives, they still managed to keep up this correspondence. It’s a lost world. The letters are illuminating and sheer joy and point to the loss of something that will never be recovered. Typing an email is just not the same as taking the time to sit down to write a letter to a friend. It’s extremely special and when they really have something to say, and its about something as important and universal as literature, it is something special to share and to experience.

Take, for example, someone like Audrey Blignault, an Afrikaans writer who for those of us who didn’t have better insight might have viewed her in a specific way. There’s a completely different woman who emerges when you follow these two smart people’s writing and exchange of ideas. It’s fascinating to read for example how they were influenced at the time by international writers like Saul Bellow, hardly able to wait for his latest novel; or when discussing someone like Tolstoy, the quality of their ideas is illuminating. It’s like bumping into a mini lecture in the comfort of your home and a real gift to have insight into their thoughts on reading and how it stimulates their inner worlds

The joy of reading and superior writing is celebrated on every page and though the accent here is on Afrikaans literature in a time when many in this world were fearful for the language, in essence, it is about reading in whichever language you prefer, the appreciation of that language and the art of storytelling. That’s universal and a great advertisement for books, something that can always do with encouraging publicity.

For Botha it would have been unthinkable not to read. Even though as a judge for many different institutions, dealing with books and regarded as one of our finest Afrikaans literary figures, it was part of her daily life, and the way she lived. Most of her career was spent in academia, teaching but also setting the guidelines in her particular field of literary theory and criticism. But she was also very aware that her career was on a slow burn (“a long slow curve,” is how she phrased it) because of being a woman in this time. Hopefully that graph might now be changing with everyone being more vocal about the problems and the social media world keeping a watchful eye.

Starting out in her early days as a journalist, she was also the editor of the Tydskrif vir Letterkunde (Magazine for Literature) from 1973 to 1992. Many celebrated authors published their first work here in the 70’s and 80’s under her guidance and nurturing. She also published often in different spheres – from literary criticism to articles and collections of literary essays. And she travelled often with literary quests as part of these journeys. She featured on every literary committee and academy of the time and for many years was the chairperson of the M-Net Book Awards.

As a woman she was often the first in many different fields, like a board member of Nasionale Pers, the first female chair of the Akademie vir Wetenskap en Kuns (Academy of Science and Art) and finally, the first female chancellor of the University of Stellenbosch, a position she occupied until her untimely death in 2007. But all of this is just a small part of her packed life as any woman who has raised three children in between all this academic superpower will know.

More than anything, says the compiler (colleague and friend), Heilna du Plooy, this collection of letters is also an effort to preserve something that is precious, and to capture people and events and views and insights which can serve as encouragement and a source of survival for others.