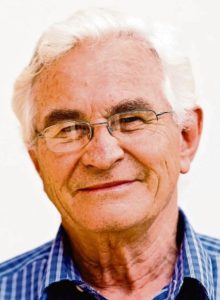 Wilhelm Jordaan started his career as a journalist and eventually became a professor in psychology. He has been a well-known and beloved columnist for Beeld and Die Burger for many years and has been called a “people’s guru” due to the illuminating insight radiating from his columns. Jordaan’s extensive knowledge and deep understanding of literature is reflected in his columns and references. He lives in Pretoria with his wife Jackie and the couple enjoy their children and grandchildren.