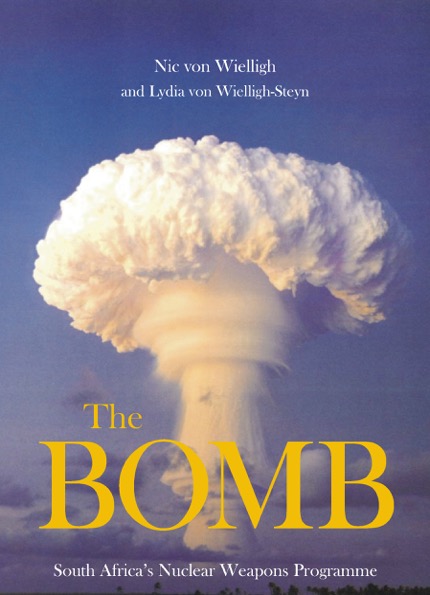 “The most comprehensive account ever of South Africa’s nuclear power, written by an insider and specialist as the main author. “It appears to be very close to the final word on the subject… Die Bom belongs on the bookshelf of everyone interested in what happened behind the screens in South Africa before 1990. ” – Leopoldt Scholtz, independent critic, historian and political commentator. Beeld, Die Burger, Volksblad. August 2014

Nic von Wielligh’s new book on the history of the South African nuclear project is a timely contribution to the on-going scholarly debate on why and how countries choose to develop, maintain and dismantle nuclear weapons programs. Since South Africa is the only country to date that has undergone a voluntary complete nuclear roll-back, its history is particularly important to scholars of nuclear proliferation, especially in the contemporary context of the debate surrounding Iran’s nuclear program and its trajectory. The author, nuclear physicist Nic von Wielligh, began his involvement in South Africa’s nuclear program in 1975, graduating into a managerial position in South Africa’s Atomic Energy Corporation a decade later. This unique position enabled von Wielligh, with the assistance of his daughter, Lydia von Wielligh-Steyn, to write the book from an insider’s perspective, revealing many previously unknown details and filling-in some much sought-after gaps in the literature on South Africa’s nuclear endeavour.[1]

The author takes the reader on a detailed journey through South Africa’s nuclear history, from the inception of the program in the early 1960s to its demise in the early 1990s, with a focus on the dismantlement process. While doing so, he does not attempt to portray his account as that of an unbiased observer, rather his depiction of the events is instilled with passion and nostalgia, and his descriptions are imbued with copious amounts of professional pride in South Africa’s nuclear undertaking. This pride sometimes obscures the fact that one of the aims of South Africa’s nuclear project was to develop bombs which could eradicate cities.

The author details how South Africa took its first steps at developing its nuclear infrastructure in 1960s, and the moment South Africa’s first nuclear reactor, Safari-1, went critical, 18 March 1965, is proudly described as “a historic moment” and “the first self-sustaining chain reaction to have taken place in Africa” (105). He further detail how throughout the 1970s, in the context of South Africa’s deteriorating international standing and geo-strategic position, a series of incremental decisions was taken by the leadership leading to nuclear weapons development (123-195). The first device was fitted with a nuclear warhead in November 1979 (170), and the first military qualified nuclear weapon was completed in 1982 as “a Christmas gift for P.W. Botha,” South Africa’s Premier (172).

In the mid-1980s South Africa successfully managed to develop its own indigenous nuclear fuel cycle, which included a uranium conversion plant, a semi-commercial enrichment plant and a fuel manufacturing plant. This capability had the potential to release South Africa of any future dependence on nuclear fuel shipments to its reactors. (200). However, these facilities were abandoned in the 1990s when South Africa was no longer under sanctions and cheaper nuclear suppliers were available on the market. To von Wielligh this was a tragic moment and he describes it as “a sad say when years of pioneering work undertaken to establish a unique, indigenous nuclear fuel cycle capacity in South Africa came tumbling down like a house of cards…” (204), adding elsewhere that “Of the once magnificent nuclear fuel cycle plants and facilities, the only operational unit that remained was also the oldest, namely the Safari reactor” (311). The parallel growth in the 1980s of South Africa’s indigenous arms industry in the face of the international arms embargo and sanctions is similarly hailed as an “outstanding achievement” (165).

Indeed, the book’s strongest suit is the richness of the details it supplies with regards to the different twists and turns the program took, and especially the evolution of South Africa’s weapons designs. The book delivers an impressive procedural account of the designs of the nuclear warheads coupled with relevant technical details, and – significantly for researchers – it supplies the different code names assigned to the project throughout their lifespans (172-174). A further significant contribution to current knowledge is the detailed description of ‘project Gouriqua’, a project approved in 1980 “designed for the large scale-scale production of …fusion bomb materials” involving plans to indigenously produce plutonium, lithium-6, and tritium “with the target dates set for…some time in the 1990s” (175). The scheme did not materialize and “little came of this ambitious project” (176).

The section dedicated to President F.W de Klerk’s 1989 decision to dismantle the arsenal, and the ensuing process of dismantlement, NPT accession and verification by IAEA inspectors contains great detail (207-282). Significantly, the author puts forward explanations to several lingering questions relating to this era, in which observers of South Africa’s nuclear history would find great interest. He maintains that de Klerk’s decision to destroy documents relating to the nuclear weapons was motivated by the belief that “as a future signatory of the NPT, South Africa had an obligation not to pass on detailed plans…to anyone…” (244).[2] He also discusses the American pressure applied to Pretoria to join the NPT “before the ANC comes to power” (230).

A particularly striking episode unfolds when Von Wielligh’ describes the private meeting de Klerk held “in early 1990” with high ranking nuclear scientists and officials, in which he informed them of the end of the program. The author, conveying a deep sense of betrayal shared by the scientists involved in the program, described this as an era “marked by outstanding scientific and technical achievements” which was “dismissively brought to an end in a brief and awkward speech, in which no real appreciation of the historical meaning of that occasion was apparent” (221).

The book’s richness is also its main weakness, and at 550 pages, the manuscript would have benefited from tighter copy-editing. The opening section contains a scientifically oriented non-controversial mainstream review of the Manhattan Project and global nuclear history which is not particularly notable, though students of nuclear proliferation might find it helpful (1-94).

Readers interested to learn more about South-African Israeli nuclear cooperation will find the sections which involve Israel rather interesting, not necessarily due to the details they divulge but rather because of the narrative. The most interesting historical episode involving these two nuclear actors relates to the Vela incident of 21-22 September 1979, an incident in which an American Vela satellite spotted a flash over the Atlantic Ocean. The incident was officially dismissed in 1980 by the Carter administration as a non-nuclear event, though today it is widely believed to have been the signal of a low yield atmospheric nuclear explosion. Many experts believe that it was probably the result of an Israeli nuclear test, possibly conducted with South Africa’s knowledge.[3]

Interestingly, this historical episode is not included in the section devoted to Israel but rather it is stashed away elsewhere in the book. The author states that “it was soon rumoured that Israel might also have been involved” (154) but he describes this possibility as highly unlikely, asking “why should the Israelis have wanted to carry out a nuclear test in 1979?” (158). He concludes this discussion by stating that since the Israeli and the South African weapons were different, with Israel basing its arsenal on plutonium implosion bombs and South Africa developing gun-type uranium devices, the attempt to link the two programs was an “opportunistic political low blow” (159).

Von Wielligh’s narrative is interesting. As a South African nuclear physicist, he ostensibly had no personal knowledge at any time of his career of Israel’s technical needs to test any particular nuclear technology neither generally speaking, nor specifically in 1979. Why would he make such assumptions regarding Israel’s alleged ‘no need’ to test? A competing alternative explanation had resurfaced in 2010, when nuclear historian Richard Rhodes cited a “well informed” anonymous source who confirmed the incident was in fact a test of an Israeli nuclear artillery shell, and that South Africa’s involvement was limited to supplying the location.[4] If this was indeed the case, South Africa’s nuclear scientists would not have been informed of any Israeli moves. Again, the interesting question here is not why von Wielligh’s book does not divulge new information, it is why he chose this specific narrative.

Other interesting bits of information on Israeli-South African cooperation are strewn along pages, and they include details on the tritium shipments from Israel to South Africa in the late 1970s and cooperation on missile development in the 1980s. A particularly thought-provoking ‘breadcrumb’ is von Wielligh’s statement that “it is possible” that the South Africans discussed how to design implosion bombs with Israel, even though South Africa ended up not producing them (297).

n conclusion, though the book is not without flaws, it makes a singular contribution to our understanding of how South Africa’s nuclear program developed and how it was dismantled. Von Wielligh’s unique involvement in South Africa’s nuclear program means that the book will benefit anyone interested in nuclear proliferation and Cold War history in general. It also opens a window to how nuclear scientists who are involved in constructing nuclear weapons view their project and how deep the sentiments they attach to their creation run.

Or (Ori) Rabinowitz, (Ph.D.), a Chevening Scholar, is a lecturer at the International Relations department of the Hebrew University of Jerusalem. She researches nuclear proliferation and nuclear history, and her book ‘Bargaining on Nuclear Tests’ was published in April 2014 by Oxford University Press. She has since published articles in International Security, Journal of Strategic Studies, and the Bulletin of the Atomic Scientists. She holds a PhD degree awarded by the War Studies Department of King’s College London, an MA degree in Security Studies and an LLB degree in Law, both from Tel-Aviv University. Before turning to academia Rabinowitz has worked as a news desk editor in several Israeli media outlets.